Hájenka is a children’s folklore dance ensemble from a smaller, though beautiful country, Slovakia. The dance group was founded in the 1988 in Petržalka, the largest district of the capital city Bratislava. Since 1993 we are accompanied during our performances by children’s folk music group called Jarabinka. Our repertoire is composed of various types of plays, dances and songs from different parts of Slovakia – Liptov, Dobrá Niva, Záhorie and the surroundings of the city Banská Bystrica. Hájenka is attended by approximately 120 boys and girls at the age from 6 to 15. The dance group is led by Michal Štefanovič, Jaroslav Mendel and Tatiana Šišková. 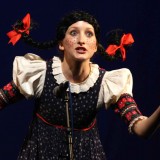 Hájenka appears at 15-20 events per year held in Slovakia and abroad. Together with Jarabinka we visited many countries of Europe – Austria, Germany, Croatia, Romania, Hungary, Czech Republic and Poland. We ventured also beyond the borders of Europe and peeked into the distant Taiwan and we celebrated twice Christmas with the antipodeans in Australia. Hájenka also took part in many festivals held at home, such as the international folk festival at Východná, Myjava, Kokava nad Rimavicou, Hrušov, Heľpa, Dulovce, Šamorín or the children’s festival in Bratislava. A biyearly regional folk competition “Vrť sa dievča” taking place in Bratislava already bought two 1st prizes, thanks to which we advanced to a national exhibition of children’s folk ensembles called “Pod likavských hradom“.